Japan’s cherry blossom season is a worldwide phenomenon. The stunning display of pink bursts through the cities and towns of Japan has been celebrated across the region for centuries.

The season resides in Japan, where it holds a very prestigious place in the country’s culture. There are a number of cruise lines which visit this region during the cherry blossom season, just so you can experience it first-hand.

Read on to find out more about what makes this experience truly unforgettable.

What is cherry blossom season?

Cherry blossom, also known as sakura, is a beautiful flower which blooms from several trees of the genus Prunus, in particular, the Japanese cherry. The flowers have an affinity with Japan as they bloom once per year across many of the regions in a stunning display of pinks, plums and white.

The season is named hanami (flower viewing) which represents not only the cherry blossom blooming but also when locals enjoy cherry blossom viewing and are at their most relaxed. Typical hanami spots include city parks, gardens and rivers, where the trees create a beautiful display of petals. Locals also hang lanterns in the trees which lights up the trees during the evenings for a cosy, alternative perspective of cherry blossom viewing.

What do they symbolise?

In ancient Japan, cherry blossoms would symbolise the rice-planting season and they were used to bless the year’s harvest. The beauty of the flowers also signified the metaphor of life as the Japanese believed that sakura trees contained spirits which made offerings to them with rice wine. This then grew into the tradition of feasting during the season which eventually evolved into the celebration that we see today.

When is cherry blossom season?

Japanese cherry blossom season differs from region to region, but it typically starts at the end of January to early May. It only lasts one to two weeks in each region due to the delicate nature of the flowers, sometimes less if it’s raining.

The season starts earlier in the south, because of the higher altitudes. Japan’s cherry blossom first begins to bloom in Okinawa in January-February, before moving to more central Japan in March-April, then ending with Hokkaido in May.

Where can you see the cherry blossoms in Japan?

There are endless places to see the cherry blossoms in Japan, no matter where you choose to go. With luxury cruise lines such as Regent Seven Seas, Crystal Cruises and Azamara Club Cruises venturing to a number of Japanese cruise ports, here are the best places to view the cherry blossoms on a cruise. 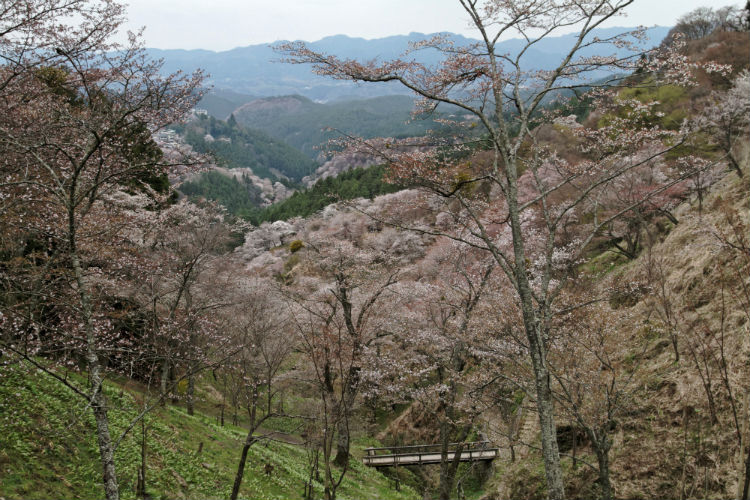 Mount Yoshino is situated in Yoshinoyama, in the Nara Prefecture. This has been Japan’s most famous cherry blossom viewing spot for years as it is covered in over 30,000 trees. Carpeted in pink and white blossoms, Mount Yoshino offers the perfect place for hanami.

The closest cruise port to here is Osaka, which is an hour and a half’s drive from the port. Worth it for the spectacular views from the cherry-tree covered slopes! 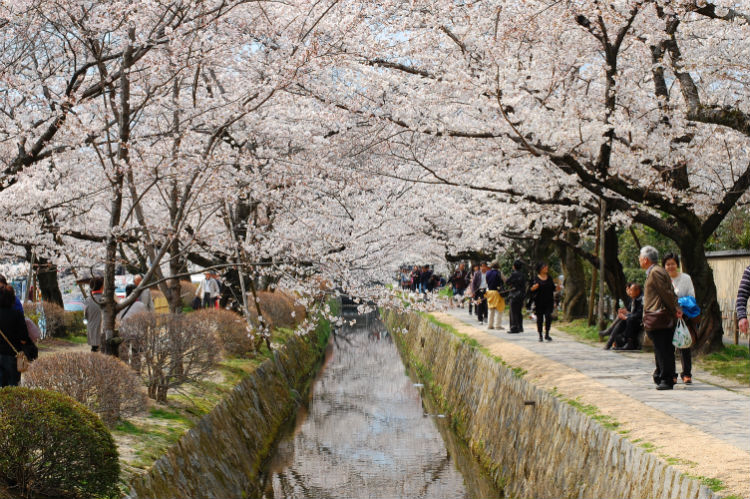 Walk along the cherry tree-lined canal and enjoy the endless canopies of blossoms above the Philosopher’s Path. The walkway is named after the philosopher, Nishida Kataro, who would meditate as he walked along this path during his daily commute to Kyoto University.

The path is approximately two kilometres long, beginning in Ginkakuji and ending in Nanzenji. There are plenty of restaurants and cafes dotted along the line of the canal, perfect for a pit-stop during your relaxing walk.

The Philosopher’s Path is situated inland of Kyoto, meaning that cruises to Kyoto would have to travel almost two hours to reach the path. An alternative would be to cruise to Osaka and catch the Shinkansen bullet train from here to Kyoto, taking a remarkable 15 minutes! There are four different lines you can take, depending on where you’re travelling to and from. The fastest is from Shin-Osaka Station to Kyoto Station, which is covered by the JR Pass. 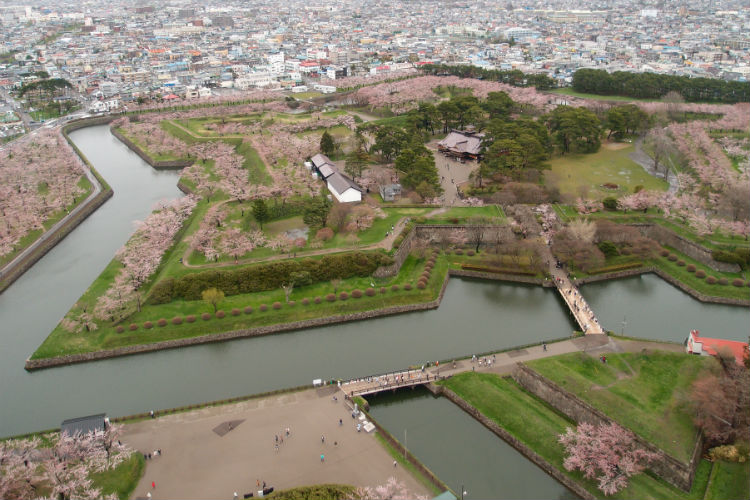 This star-shaped citadel is Japan’s first Western-style fortress which was initially built during the Edo Period to defend Hakodate. After losing is military importance as the years have moved on, the fort is now a public park and home to over 1,000 cherry trees. One of the best places to take it all in is from the top of Goryokak Tower, a 107m tower which has an observation deck.

Goryokaku Fort is situated close to Hakodate’s port, only a 30-minute bus ride from the dock. 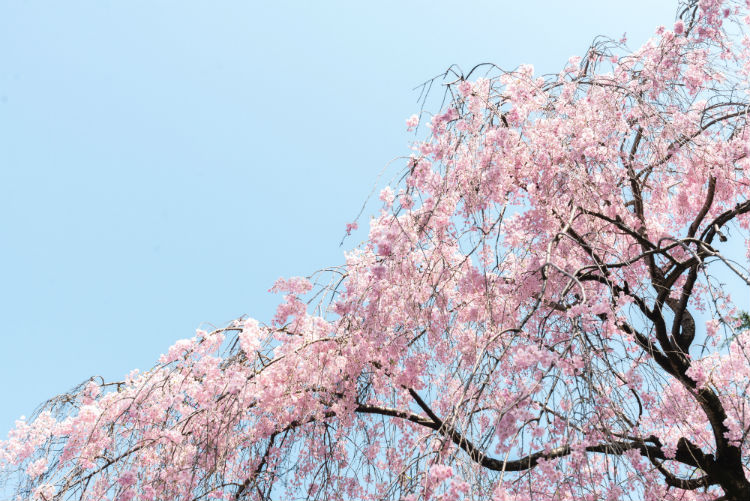 As one of Japan’s most beautiful gardens, Shinjuku Garden is an excellent place to sit back, relax and enjoy hanami in peace and quiet. The gardens have more than 1,000 cherry trees which blossom into a magnificent display during the season. The garden features French, English and Japanese-style gardens and is perfect for watching the world goes by.

Many of the trees which blossom here are of the late blossoming variety, so you can opt to visit here after peak season to avoid the busiest time. The garden is situated close to Tokyo cruise port, just a 25-minute drive from the dock. 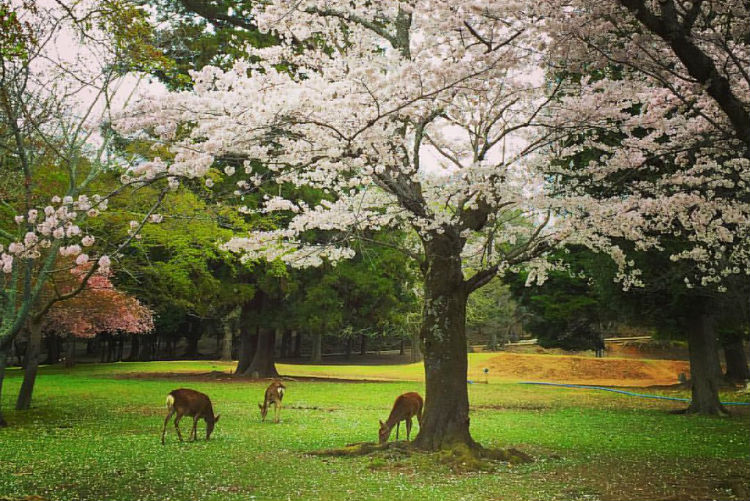 Another prime Osaka hanami spot is Nara Park, which offers a pleasant place to walk not only amongst 1,700 cherry trees but also over 1,000 wild sika deer. The park is a designated Place of Scenic Beauty, and the deers are classified as a national treasure. According to folklore, the deer are considered sacred and believed to be messengers from the gods. You can even purchase deer crackers in the park and feed them!

As well as witnessing the stunning cherry blossoms, you can also visit the Nara National Museum and Todai-ji, where the largest wooden building in the world houses a 50 ft tall statue of Buddha.

Nara Park is less than an hour’s drive from Osaka’s cruise port, so you can visit here on a sailing quite easily. Cruise lines which sail here include Silversea, Oceania Cruises, Crystal Cruises and Azamara Club Cruises. 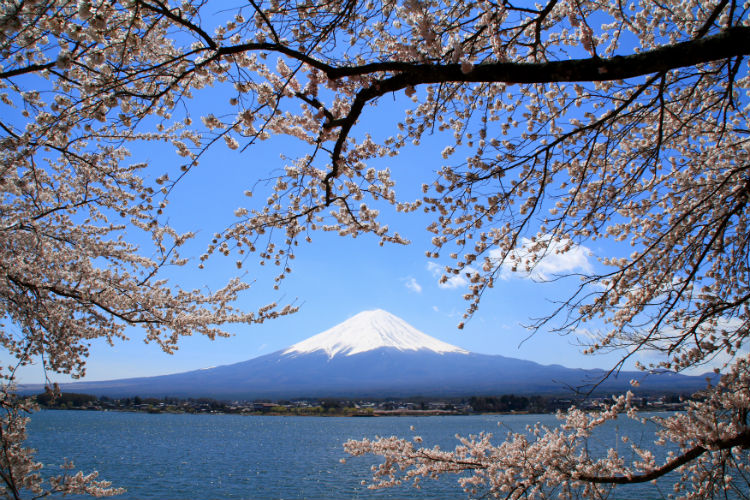 An iconic natural landscape in its own right, you can tick two natural wonders of Japan off at once by visiting Mount Fuji during cherry blossom season. Visibility of Mount Fuji is usually best in the early morning with a trip to the Fuji Five Lake region, comprising the lakes of Kawaguchiko, Saiko, Yamanakako, Shojiko and Motosuko.

Lake Kawaguchiko is the easiest to reach by public transport, opting to take the train from Tokyo to Kawaguchiko. From here you can view Mount Fuji with its stunning backdrop amidst the beautiful cherry blossoms. 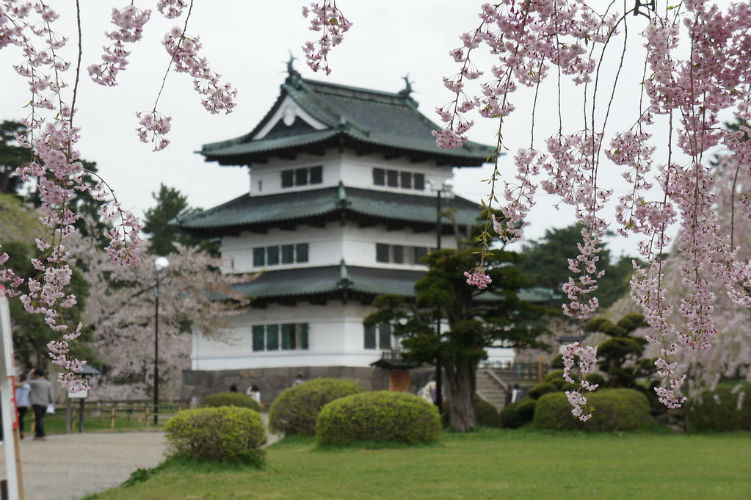 View sakura at Hirosaki Castle and you can look forward to blossom tunnels, boat rides, petal-filled moats and nighttime illuminations. With over 2,500 cherry trees the area bursts into a delicate display of pink petals that makes for a really magical hanami spot.

The castle itself is a national important cultural property, with the views of the snow-capped Mount Iwaki in the background offering a wonderful snapshot of Japanese history and nature as one.

There’s even a festival in Hirosaki where you can enjoy fireworks, parades and plenty of food stalls serving Japanese delicacies such as yakisoba (fried noodles) and takoyaki (octopus fried in balls of batter).

The castle is around an hour’s drive from Aomori’s cruise port, though it’s well worth it just for the experience of the Hirosaki Cherry Blossom Festival.

Book a luxury cruise to Japan

Are you left longing to view the stunning displays of pink blossoms in Japan? Take a luxury cruise here and experience not only this unique natural phenomenon but also the scenery throughout Japan as it offers immersive heritage and history galore.

Cruise lines which visit Japan include Azamara Club Cruises, Crystal Cruises, Oceania Cruises, Regent Seven Seas Cruises, Silversea and Seabourn. See all of our cruises sailing to the region by clicking the button below, or call our Cruise Concierge team on 0808 202 6105 for expert advice and award-winning customer service.

See all cruises to Japan

Have you visited Japan before? Would you like to see the cherry blossoms? Let us know in the comments below.

2 Responses to “More than a cruise: Cherry blossom season in Japan”